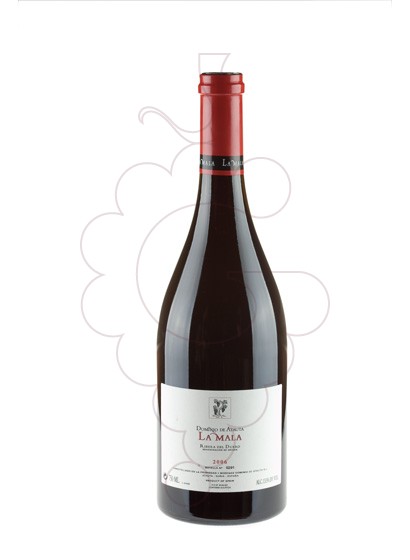 Aroma: Nose with great aromatic power. The characteristic and noteworthy fact is its minerality, very indicated in La Mala, thus expressing abundant notes of white chalk where they blend almost perfectly with the herbal and floral aromas; Lavender, Rosemary and Chamomile infused with hints of ripe red forest fruit.

Taste: In the mouth you will be welcomed again by the most characteristic of La Mala, its minerality. With a very elegant development, as only perhaps signed by the great wines of Ribera del Duero, it balances with a minerality and an extraordinary sensation. Long and persistent finish.

Serve at a temperature between 16º and 18º. The most characteristic fact is its minerality, where the land plays a major role. Dishes where the presence of truffle is important, grilled cohinillo, baked cod, sheep cheese, garlic soup, etc.

La Mala is one of the three premium wines produced in Bodegas Dominio de Atauta. It shows the personality of a payment located in the Atauta Valley with a depth of only 0.7 m to the calcareous rock. Due to this shallow depth the yields of each strain are extremely low. This factor, together with the special characteristics of the soil, provide one of the winery's most interesting wines. The parcel, precisely, takes its name from the low production of its vines, for which it was formerly considered unprofitable and was called Mala La Mala ’.

The harvest was carried out on October 27, 2013, after which a double selection was made (bunches and grapes) at the entrance to the winery, followed by a parcel vinification with indigenous yeasts in open 1000L stainless steel tanks by punching. The malolactic fermentation and aging for 18 months is carried out in second-year French oak barrels.

Dominio de Atauta la Mala, red wine D.O. Ribera del Duero, one of the more than 9000 products you can find in our online shop.