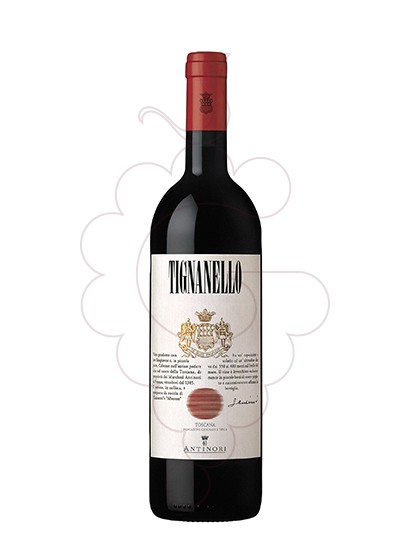 Tignanello is produced exclusively from the vineyard of the same name, a parcel of some 140 acres (57 hectares) with limestone-rich soils and a southwestern exposure at 1150-1325 feet (350-400meters) above sea level at the Tignanello estate. It was the first Sangiovese wine to be aged in small oak barrels, the first modern red wine to use such non-traditional varieties as Cabernet in the blend, and among the first red wines from the Chianti Classico area to be produced without white grapes. The wine, originally called "Chianti Classico Riserva vigneto Tignanello" (a Chianti Classico Riserva from the Tignanello vineyard), was produced for the first time from a single vineyard parcel in 1970, when the blend contained 20% of Canaiolo and 5% of Trebbiano and Malvasia, both white grapes., and the wine aged in small oak barrels. In 1971 it became a Tuscan red table wine rather than a Chianti Classico, and was called Tignanello. In the 1975 vintage the percentage of white grapes was definitively eliminated from the blend. Ever since 1982, the blend has been the one currently used. Tignanello is bottled only in favorable vintages, and was not produced in 1972,1973,1974, 1976, 1984, 1992, and 2002.

Antinori Tignanello Magnum, red wine I.G.T./D.O.C. Toscana, one of the more than 9000 products you can find in our online shop.