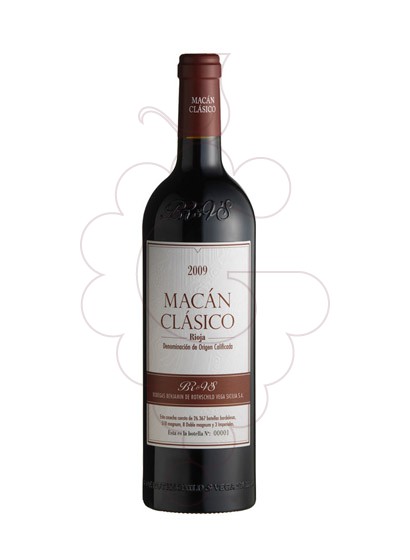 Unlike its older brother, Macán clásico has a more expressive fruity load that harmonizes with a delicate and timid wooden presence. It is perceived with a charming simplicity, where the finest notes of variety and aging are immersed in a total balance.

Entry in the mouth where it is a gift for the palate, and is tremendously fine and delicate. Harmonious and constant tannins will lead you back to an end where persistence will be carried with extreme discretion. In this wine it is reflected that simplicity is the key to elegance.

The farm has a 250-hectare vineyard plantation, of which 80% is planted with the native variety, Tinto fina or Tempranillo, and the rest with Cabernet sauvignon, Merlot and Malbec. The soils are clay-calcareous, with brown and alluvial zones.

The beginning of the 21st century came to the Álvarez family (current owners) with a new challenge: the landing of Vega Silicia in Rioja. To do this, the group joined another of the mythical names in the world of wine, Benjamin Rothschild, owner of important wineries in France.

Both companies jointly launched the Macán wine, corresponding to the 2009 vintage, the first Vega Sicilia wine in the D.O.Ca. Rioja. In June 2017, the inauguration of a spectacular winery located in the municipality of Samaniego projected by the architect Enrique Johansson, which was attended by, among other personalities, King Emeritus Juan Carlos I.