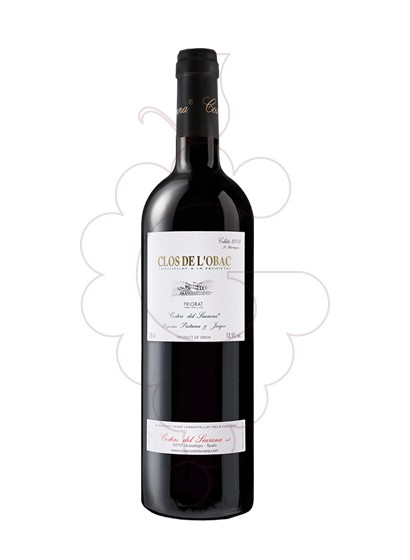 Very balanced on the palate, where your notes wrap your palate in the best possible way. It is complex and very structured with a long and very persistent finish and where the notes of spices and the subtle touches of cocoa leave you the best experience.

We recommend accompanying it with dishes of stewed red meat, game dishes, and dishes with a certain power of taste.

The marriage of the journalist Carles Pastrana (Tarragona), and the oenologist Mariona Jarque (Barcelona), proposes, at the end of the seventies, the adventure of his life dedicating his family and professional future to the project of recovery of the Priorat wines and the subsequent projection of these wines on an international scale. Thirty years after those beginnings, together with their two children, Guillem and Iona, the essential future of this story, they have consolidated a project that is known all over the world today.

In 1979, Carles Pastrana and Mariona Jarque recover the family wine tradition by initiating a long adventure that aims to rescue the ancient Cartujano wines in the heart of the lands that were protected by the former priors of Scala Dei, a monastery located in the Priorat region. They create the Clos de l'Obac and Miserere properties, replanting the vineyards on the banks of the Siurana River in the southern pre-coastal area of ​​Catalonia, and form the Clos de l'Obac winery. Since 1989 they have been making the first wines and Clos de l'Obac is considered by the World Guide to be one of the 150 best wines in the world.

To the south of Catalonia, between the littoral and pre-littoral mountain range, the Priorat is a land of hills and slopes oriented to the four cardinal points, which have a median height of 350 meters, and which are formed by rich slate substrates located on both sides of the Siurana river. In this hard geography, the crops benefit from an extraordinarily rich soil and a microclimate that generates the imposing Sierra del Montsant, a natural barrier of 1166 meters that regulates the temperature of the region, putting it safe from the inclemency of the north. The group, orography climate, and terroir (llicorella) confer a marked differential organoleptic characteristics that give the Priorat wine the unique personality of which winemakers and sommeliers from all over the world speak.

The wines of Costers del Siurana go through an extremely precise and very careful aging process. Once the wine is finished, and depending on the outside temperature, for three or four months the fermentation and stock vats are left to rest in contact with the intense cold of the winter in order to provoke the first natural stabilization without having to serve isothermal tubs and shovels.

Subsequently, the wine, always by gravity, is transferred to the aging room in French oak barrels of the Limousin, Allier and Nevers varieties, where it will remain between ten and fifteen months according to the characteristics of the vintage. During this time it is subjected to decantations through manual transfers controlled by candle, in order to separate and remove regularly the lees that are deposited in the bottom of the barrels and that can dirty the wine altering the good tastes and aromas. During the months of aging, the barrels are exposed to the cold prioratine winter in order to provoke in the wine a second natural stabilization, taking advantage of that moment to carry out the manual clarifications with clear of fresh eggs, barrel to barrel.

The winegrowing region of Priorat is located in Tarragona, bordered by the “Sierra del Montsant” on the north, the Molló Crest on the east, “Sierra de la Figuera” on the west and by the Siurana River on the south. Worldwide famous for their excellent wines in terms of quality and concentration. The Denomination is composed of 99 cellars and more than 600 winegrowers with a planted surface of 1800 hectares.

OTHER PRODUCTS OF ... Costers Del Siurana