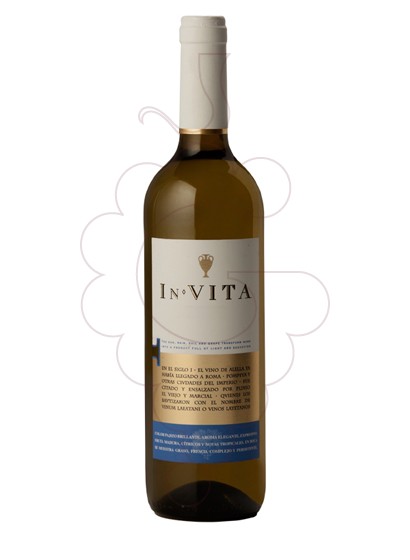 Delicate and subtle, it shows mineral notes combined with an explosion of white ( apple ) and tropical ( pineapple ) fruit and citrus notes, with an elegant aromatic touch of Mediterranean herbs.

Balanced wine with character, with a fine and silky mouth, but with body and personality. Elegant, full of flower and white fruit nuances, on a mineral background reflection of so characteristic terroir.

It is the perfect complement to dishes that contain fish and seafood, rice dishes, fideuas. Also ideal for Asian cuisines such as Japanese and Thai, tempuras, and sushi.

IN.VITA
It is a white wine made in the D.O Alella that belongs to the Señorío de Libano winery.

Some names seem to have their essence in their own sound. The name Sajazarra echoes strength and firmness, the same vigor that still makes the castle's ashlar proud, the majesty exhibited by its towers, balconies and loopholes. Sajazarra brings echoes of power, savored by its fortified enclosures in many bloody battles between medieval kingdoms witnessed by its battlements.
In the surroundings of Sajazarra you can also find other names full of history, full of stories. The Count of> Nieva, lord of the primitive fortress erected in the 13th century and ancestor of Don Diego López de Zúñiga and Velasco, viceroy of Peru. Or Don Pedro Fernández de Velasco, owner of the bastion in the 15th century, named Constable of Castile by Enrique IV. Or the most humble Juan Martínez, an arnedo born so devoted to his Virgin of Vico that he released him from the castle dungeons to fulfill his fervent desire to attend mass on Saturday.
In our time, the shadow of Sajazarra is linked to the Líbano family, who acquired the bastion, which had deteriorated considerably over time, and began the restoration with precision and enthusiasm. The castle revealed its best kept secret, the wineries for making wine and a press. Perhaps an act of gratitude, perhaps a sign.

From that moment on, an exciting company was launched: they acquired land on the slopes of the Montes Obarenses, a perfect place for its clay-calcareous soil sheltered from the winds; vineyards are planted, mainly Tempranillo grapes; they harvest at the end of October, as in all this distant region of the Rioja Alta; and they make the first vintage in a strictly artisanal way, so, finally, in 1973, the first wine is obtained.

Once its excellent quality was verified, at the same level as the best Rioja Alta wines, they commercialized it, increased the number of barrels, improved the facilities and, finally, moved the winery to new buildings located in the castle gardens, and jealously designed to respect the aesthetic harmony of the environment.

Thus was born the Señorío del Líbano and Castillo de Sajazarra winery, one of its brands, a wine that carries the power of its roots and ancestry.

IN.VITA BLANC
Grapes of the Pansa Blanca and Sauvignon blanco varieties, from their own vineyards located in La Roca del Vallés, in the area of ​​Bell-Lloc.

Elaboration:
The white Sauvignon is harvested by hand and in boxes of 20 kg. The Pansa blanca is harvested in October, also by hand, in 2,500 kg trailers. stainless steel. Subsequent passage through the selection table to eliminate all defective bunches. Maceration with dry ice for 6 hours and pressing in a pneumatic press. Fermentation at 16 degrees centigrade for 21 days. It remained on its lees for 3 months.