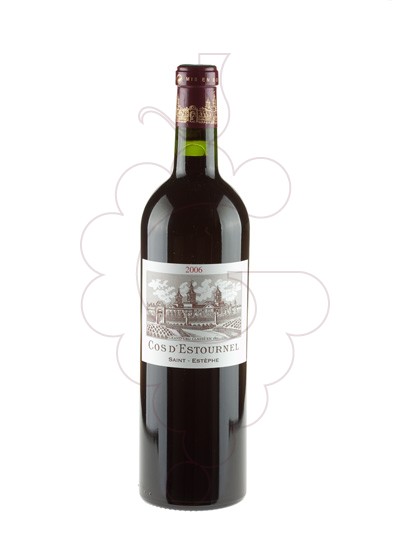 It has impressive aromas of cassis, liquorice, violets, black currants, truffles, opening after to a smoked meat and incense aromas.

Juicy, but with good flavour intensity and subtle sweetness. There is a wine without a very fleshy style but who has a strong structure.

His good taste makes him able to be consumed next to any stew, and that could become an unforgettable experience.

The property was always dispersed, until, in early nineteenth century, Louis Gaspard d'Estournel inherited 12 hectares of vineyard and decides to produce his own wine. Encouraged by the result, decided in 1811 to buy the entire hill. Due to their constant travelling overseas soon was known as the "Saint-Estèphe Maharadjah. To celebrate its successful in Far East, and (as a legend said) in love for an Indian princess, decides to start a building in his honor.
Thus was born in 1830, the legendary Cos Pagoda, with its famous carved wooden door, brought from the palace of the Sultan of Zanzibar, one of the most unique buildings in the Médoc. In 1852, with 91 years and ruined sells his Cos to the English banker Charles Cecil Martyns, and then he unable to see the success of their efforts rewarded with the 1855 classification. Then goes into the hands of the basque aristocrats Errazu and then to Bordeaux family Holstein, also owner of Montrose.
In 1917, reaches the hands of Fernand Ginestet, whose grandson Bruno Prats has been its director and soul until 1998, when he sells the property. Despite the sale, his son, Jean Guillaume Prats, remains director of the winery. The vineyards, separated of Lafite by a creek, have 65 acres, with 60% Cabernet Sauvignon and 40% Merlot. The subsoil is calcareous and the soil is full of boulders of various sizes.